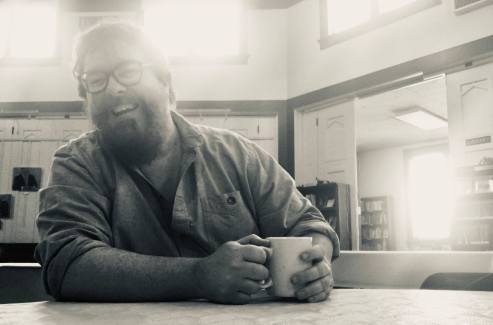 Jerome Stueart holds a PhD in English (Creative Writing) from Texas Tech University. He’s taught writing workshops for more than twenty years in colleges and universities, as well as churches and schools and afterschool programs. He was a recipient of a Milton Center Fellowship in 1996 (now offered through Image Magazine), received a Fulbright Fellowship to Canada in 2001, a Clarion Fellow for Science Fiction and Fantasy Writing in 2007, and a Lambda Literary Fellow in 2013.  He co-edited Tesseracts 18: Wrestling with Gods, from Edge Science Fiction and Fantasy Publishing, an anthology of stories from various authors in Canada of science fiction and fantasy that deals with faith.  His first collection of stories, The Angels of Our Better Beasts (ChiZine, 2016) was longlisted for the Sunburst Award, of which World Fantasy Award-winning Black Gate Magazine said, “easily one of the best collections by a single author I have ever read.”  His short work, both fiction and nonfiction, has been published in Geist, Joyland, Geez, Lightspeed, The Magazine of Fantasy and Science Fiction, Fantasy, Fat & Queer: An Anthology of Queer and Trans Bodies and Lives, several Tesseracts anthologies of Canadian science fiction and fantasy, as well as newspapers, magazines, and journals. His story, “Postlude to the Afternoon of a Faun,” was a finalist for the 2020 World Fantasy Award in Short Fiction.

Jerome grew up a Southern Baptist in Missouri and Texas, was a Religious Education Director (in a Quaker church), Music Minister (in two Baptist churches), and eventually became a deacon in a Baptist church in Whitehorse, Yukon.  Then he came out in 2009.  He was asked to resign, and not allowed to publicly address the church. The experience of trying to tell his story to the people he loved most was frustrating.  He could not find enough good Christian literature on being gay and Christian to convince my congregation that he was not “making a sinful choice.”   And this sparked a desire to turn his love of writing into a way to reach the people he loved.

Until 2004, he wrote primarily science fiction and fantasy, but he realized after coming out, that there were few liberal voices in the choir of Christian literature and media.  Few in the mainstream either.  And so he started writing pieces to help Christians understand the LGBT community of believers.  He created Talking Dog Resources, a webpage for churches who want to understand the LGBT people hiding in their midst, and give them ways to find common ground.

He is currently working on other novels and short stories.

Learn more about him through his other blog, Yukon Science Fiction Writer which, from time to time, has a cross-over with this one.